Honestly for me, I think the most intriguing aspect of the OCBA is the NCSBA Master Beekeeper Program. It’s amazing how much work and dedication is put into beekeeping and this is extremely evident with the exams and merit requirements of each level of the program. Ever since I heard about this program from the Bee Club, I had my mind set on getting certified.

Just as a side note, the exams taking place at the park was an excellent idea. Not only is it a quiet and relaxing location, it also was covid friendly since we would be all spaced out.

Anyways, one thing that made me the most nervous was that we had to take the written part of the exam several weeks after Bee School ended. Sure, OCBA offered multiple testing dates but what fit with my schedule was the one a week after school went into spring break :O. I was worried that I wouldn’t be able to apply all the material that I learned from bee school in such little time. However, I was absolutely determined to pass and I did all the studying that I could. Studying the material per se wasn’t terrible, but what I found from the practice tests was that there were these tricky questions not mentioned in the OCBA handbook, so additional research was required. Throughout the week, I have to admit that I was terribly paranoid about the types of questions they were going to ask. Ironically, it made me even more nervous when Randall claimed that this exam was the easiest in the history of OCBA, haha!

To be completely honest, I am not a good test taker as I get easily tripped up with tricky questions that are worded slightly differently than the way I learned the information. I’m just like a machine that spits out answers that explicitly correspond to the questions. So naturally for the week prior to the test, I was trying to train my brain to think outside of the box… and it made it even worse in terms of anxiety.

When the day to take the test arrived, I was jittery and nervous. I never had this experience in my entire life so I was thinking of every possible way the exam would trick me. When the proctor said that the test was very straightforward, I had a bit of confidence… BUT! 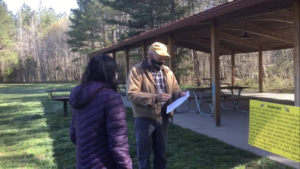 Okay, this is really hard to explain. So the questions were “straight forward” (at least some of them), BUT they were still tricky as there were other options that sounded like good answers as well. Some of them were not explicitly mentioned in the OCBA handbook and classes and required intuitive thinking, which I didn’t have as a beginner.

As a result, I think I spent an hour there, longer than any of the other test takers and I was pretty embarrassed about that. I kept struggling to choose the best answer as I worried that I was going to get jinxed. Even the proctor was telling my mom how I was overthinking the test way too much.

My thought processes while taking the test 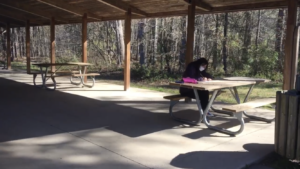 One of the major question types were those that were very specific. One example is “What do bees breathe through?” Some questions like those were very simple and took around 3 seconds to answer. HOWEVER, there were many exceptions. For instance, my memory slipped with the question about the nasonov gland and I was forced to skip the question and move on. The difficult part about beekeeping is just how extensive it is and when it comes to test taking, you simply cannot remember EVERY SINGLE SPECIFIC FACT. So basically, if you haven’t known it prior to the test, the chance of getting it right is slim. However, the strategy I’ve come up with is process of elimination. I quickly crossed off 2 that sounded absolutely ridiculous but afterwards, approached 2 more that were a bit tricky and vague. One of them was indicating that the nasonov gland was located in the abdomen and the other was stating that it’s an alarm pheromone. These were tricky because “located in the abdomen” sounded so basic and general while the other answer choice sounded factual and legit, but I knew in my head that there was something in that answer that sounded off. So I decided to first visualize where the nasonov gland could be located. The first thing I came up with was a bee fanning, which successfully led me to confirm that the nasonov gland had to be around the abdomen area. However, a nasonov gland also emits pheromones and when bees start to become more defensive, they also emit pheromones. Once again, I was back at square one. So I ultimately decided to determine which answer choice was the most right, not the most eloquently stated. I knew intuitively that the bees used the nasonov gland for guiding everyone into the hive (orientation and recruitment), so I was able to determine that the other answer choice indicating that the nasonov gland is an alarm pheromone was not 100% correct. After crossing that answer choice out, I was able to successfully choose “located in the abdomen.” It was a huge mind boggle but I was happy to overcome that voice in my head that said “there could be a possibility that any answer choice could be right.”

Another major test type were those questions that required creative intuition and prior experience, not something just out of a textbook. For instance, there were questions like “What time of the day is the best time to open bee packages,” “Which can be used as smoker fuel,” “How long should you treat for varroa mites,” and “Which type of pesticide infestation is the most deadly” (I don’t quite 100% remember the exact question). To me, those questions were the hardest and required the most critical thinking. I remember when I came across those questions, I kept bouncing around different answer choices with no concrete progress. There was always one that sounded right but not good enough and there were others that had the possibility to be the right answer but also sounded wrong. Also, I find that these questions can easily vary depending on the location or who you’re asking. So the strategy for these was just… well… guessing and trying my best to answer with limited prior knowledge and experiences.

The last question type was, of course, true and false. I would say these questions heavily varied in difficulty. For example, there were those that were easy to answer and those that were just like the intuition and prior experience questions. Some were concise and others triggered my “what if” thought process. So with these questions, I started off with the easier ones and skipped the ones that were vague and came back to them later.

So yes, this is what made me take a horrendous amount of time.

When I finished taking the test, I felt very pooped. I was kinda humiliated and uncertain about the amount of answers I got right. I kept googling the test questions to see if I got it right and kept panicking about those that I knew I got wrong. Needless to say, it was not a good day, but my mom was kind enough to take me to Wegman’s to get a treat.

When I got my test results back, I realized that I did pretty well and passed! Randall even mentioned that this year was exceptionally challenging so it felt relieving that I wasn’t the only one struggling. Next year, I can’t wait to take the practical exam!

In conclusion, the difficulty of an exam is subjective and cannot be measured, so please don’t take any test for granted and always study for it if you are unsure about what the exam will be like. Also the best studying tip I can give you is to just learn a bunch of bee info CAREFULLY and to look up practice exams. Also, don’t overthink these questions since that can backfire (that definitely happened to me several times).