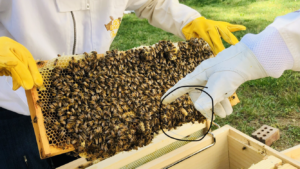 Around May 21st, my mentor, mom and I went to inspect the hives. The white hive was fine. There were no abnormalities. We were excited to see there was capped brood! However, when we checked the blue hive, we noticed something… not quite right? There were queen cells at the bottom of the hive, meaning that this hive was now queenless.

We were disappointed and heavily concerned. We were worried that this hive would suffer a terrible fate. I remembered when I visited Kent and Vicki’s hive ( also queenless), there was a piles of dead bees. Nonetheless, to my surprise, Cely wasn’t too worried. In fact, she was confident that the hive would be fine. In fact, the queen cells were a great indication that the bees were diligently working to create a new queen.

The two possible explanations of the queen’s death were:

1) Accidentally squishing her when we tried to remove burr comb from the miller feeder.

This is what my mom speculated. During the inspection, we learned how easily one could carelessly kill the queen during an inspection and so my mom came to the assumption that we might have killed her when we were clearing out burr comb from the miller feeder as we were being very rough while doing so. I remember disagreeing with her on this, but this is definitely a possibility.

Whatever the reason was, the blue hive bees are nevertheless working hard to replace their queen.

After the inspection, I was advised to contact my cluster group about the situation. I gained great insight from some of the responses I got.

Alan helped me understand how I should assess the queenless hive.  Here are his questions.

Cely suggested two options; combining the hives or waiting it out.

John assured me that temporarily queenless hives are not an unusual occurrence and that this is a great learning experience and that this would also give me the chance to learn about the inner workings of the colony.

He also gave me a cool way to predict when to expect new workers (Queen math):

At first, this was quite overwhelming, but I later got the hang of it. 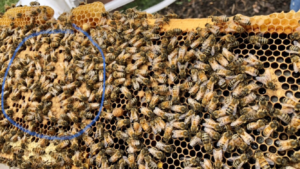 Approximately 21-22 days later (June 12th), Cely, Vicky, and Kent came to our house to help us win an inspection. Just like John had predicted, the blue hive had emerging worker brood and healthy looking larvae. Yay! We were so happy and excited to see our blue hive making progress, so much so, that we were finally able to add another box to it. However, what was a bit concerning was that we couldn’t find the queen. My mentors reassured me that there wasn’t anything to worry about since we were able to find capped brood and larvae.

So yes, since we experienced this potentially queenless situation, we now  are much more aware and careful when we do inspections. To my dismay, killing the queen is so much easier than it looks. 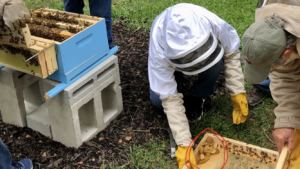 After the June 12th inspection, a strange phenomenon occurred.

We had to remove an obscene amount of burr comb at the bottom of several frames in the blue and white hives. What made it even crazier was that there was already brood and pollen in them.

When we were done, we decided to store them in a plastic container as we did for earlier collected brood comb. It was almost like a souvenir but quite a peculiar one.

After three days later, my mom and I observed the strangest thing… live bees were emerging from the burr comb – 3 days after separation from their hives! This was truly unbelievable to us. I am glad that we collected these peculiar burr combs since we were able to learn more about the life cycle of bees and how they emerge from the cells. 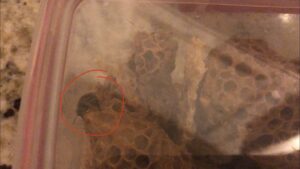 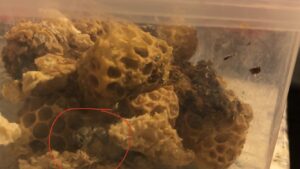