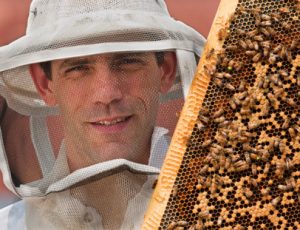 This month Dr. Olav Rueppell, professor of biology at UNC-Greensboro, will present some of the results from his research in his talk entitled “Studying the Varroa-Virus-Honeybee Disease Triangle”.  Varroa and viruses cause significant honey bee health problems and few viable options exist.  Dr. Rueppell will present his research conducted to better understand the transmission of viruses, and better protect the bees from infection.  He will also present research on Varroa and hygienic behavior that has led his group to test a new method for selecting more hygienic bees.

Join us at 7PM at the Unitarian Universalist Church in Hillsborough for the meeting. All OCBA members are also invited to Radius Pizza at 5PM for dinner and casual conversation with other beekeepers.

Dr. Rueppell received his PhD in Germany for work on ants in 2000 before moving to California to work with honey bees from 2001-2003. Then, UNC-G hired him as an Assistant Professor of Biology, and he has since been promoted to Associate and Full Professor (in 2008 and 2013, respectively). He currently holds the Endowed Florence Schaeffer Professorship of Science. He has published over 90 scientific articles and his work has been funded by various institutions, including USDA, NSF, NIH, and DoD.  His scientific interests focus on causes and consequences of social evolution, and he uses honey bees as models to evaluate these scientific problems at the genetic, cellular, individual and societal level of biological organization. Accordingly, his research methods comprise bioinformatics, genetic analyses, studies of cells, behavioral and physiological observations and experiments, and demographic and ecological approaches. Social insects fascinate him because their societies add an interesting level of complexity; many social insect groups have experienced a broad ecological success and some species are very important to humans. Some specific current research projects include studies of honey bee reproductive traits, genetic characterizations of complex traits that are important in social organization, the investigation of honey bee intestinal stem cells, biodemographic studies of aging, and comparative genomics projects. Furthermore, he is interested in honey bee health and his group seeks to understand how viruses, parasitic mites, and stress contribute to the ongoing honey bee health crisis with the goal of identifying sustainable solutions.